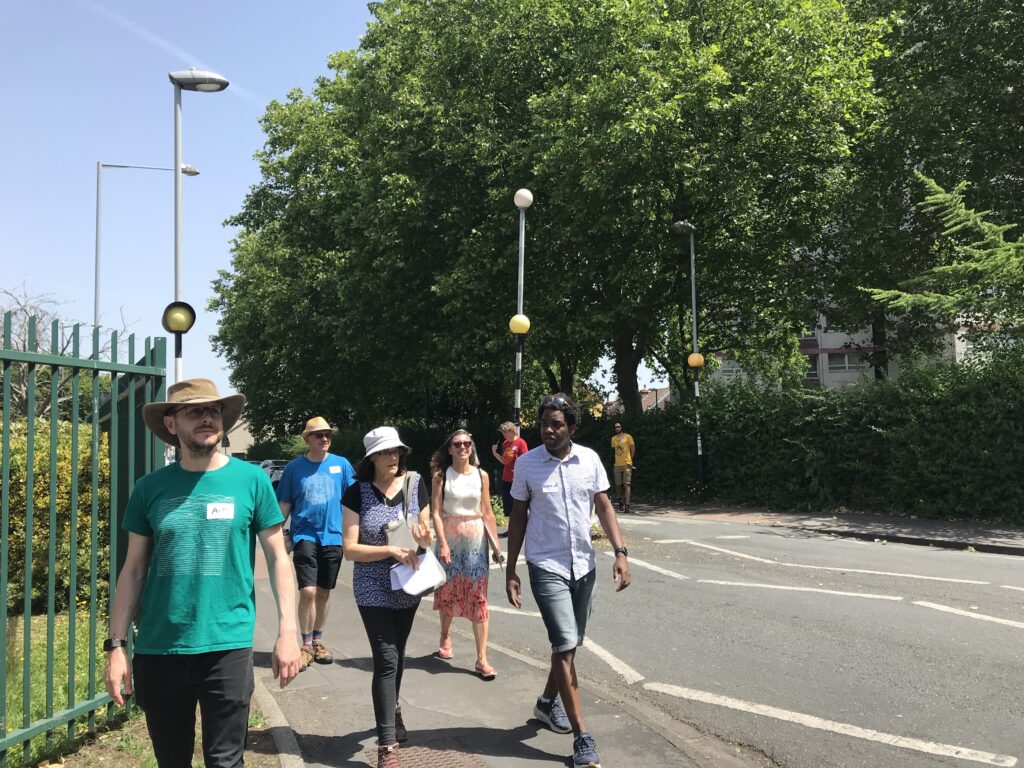 Tranquil City had a great few days in Bristol running workshops on the Green Routes feature that we’ve developed with Go Jauntly. We saw some beautiful places and met some inspiring people. The Green Routes feature can help people to plan greener and more appealing walking routes away from busy main roads, promoting a shift from the private car to active travel for short urban journeys. Our initial insights can be found below!

Working with Darron Hamilton of Bristol City Council we hosted two workshops to test the Green Routes feature and gather essential feedback on how it can help people make positive changes to their behaviour. The workshops collected important information to indicate the potential impact of the Green Routes feature via a questionnaire and example walk comparisons, developed in collaboration with Environmental Psychologist Eleanor Ratcliffe of the University of Surrey. The project is aimed to support the delivery of the Bristol One City Plan, which includes an ambition to promote a radical modal shift towards walking and cycling, tackle health inequalities in active travel and promote reductions in air quality emissions and exposure. Our wider aim is to develop a method to link the project outcomes with the UN Sustainable Development Goal measures and provide an example of how increased access to healthier, greener environments can be achieved in urban areas where access is most restricted.

As part of the workshop, we carried out a baseline survey to understand current travel habits. The results showed that 38% of participants walked between 10-30 mins a day, with the majority walking more than that. Walking was the most common mode of transport already, followed by private car and cycling.  In 2020, UK government data for England showed that if people are walking more than 30 mins a day, it’s generally for leisure, rather than transport. Interestingly, E-scooters were shown as a common mode of transport, which relates to the recent expanded service of the shared E-scooters operator Voi to cover large areas of the city. The biggest barrier to walking identified was both ‘time constraints’ and ‘physical or health constraints’. Another barrier, further discussed during the Barton Hill workshop, was concern for safety, which was identified as a particular concern for women walking at night.

A follow-up survey will be carried out after 4-6 weeks of using the Go Jauntly Green Routes feature, to see if habits have changed.  Interestingly, when we asked “how easy do you find each travel mode”, private car routes were considered easier to find than walking routes (walking was considered by most as ‘easy’, with private car use considered by most as ‘very easy’).  We aim to change that, by giving people easy access to greener, more tranquil alternative walking routes.  By choosing to walk these routes, people can increase their time spent in more natural environments, and walk for short journeys in local areas rather than driving and therefore cut carbon emissions and local air pollution. Our hypothesis is that the more pleasant and enjoyable a route is, the more likely people are to choose walking it. Let’s see what the results say!

The workshop on Friday 17th June was held at the Wellspring Settlement at Barton Hill. What a lovely space for the community, with a community hall, courtyard garden and rooms for the events, classes and health support. The people who came along were both from the local area and from slightly outside it too, which gave a good mixed view of perspectives.

We walked an example route to the nearest Tesco Metro, which was considered a typical journey in that area. The ‘Fast Route’ passed along the main road, a total journey time of 11 mins. The ‘Green Route’ avoided this main road, and took a parallel street, via green spaces, terraced housing and green front gardens. Each was calculated using the Green Routes feature. The Green Route was 12 mins on the app, an extra 1 minute compared to the ‘Fast Route’, but with in an increase in tranquillity rating by +22% (44% for the ‘Fast Route’ and 66% for the ‘Green Route’).

Participants were asked to report how they were feeling both before and after each journey to understand the impact of walking along each route.

The results for the ‘Fast Route’ show that participants’ mood (ranging very unhappy to very happy) changed negatively from the majority being ‘happy’ to the majority of people being ‘neutral’ or ‘unhappy’. People also were feeling more tense than relaxed, as a direct result of the walk. For the ‘Green Route’, it was the opposite effect. For only a small change in route, with moderate green features, but less traffic, noise and pollution, the result was that people felt ‘happier’ and more ‘relaxed’ than before the walk.

Following the walks we talked about how communities could use the app to plan local health walks, making the job of planning and leading weekly wellbeing walks a much easier task. We also had an important discussion about when people do and don’t feel comfortable taking tranquil routes away from the main roads, especially regarding safety at night, which would affect when and how they use the feature. Another aspect was the fact that cars parked on pavements meant that access for people with wheelchairs and/or mobility scooters was limited, as well making having casual conversations while walking difficult. Data to predict this is available as part of our Healthy Streets Index, which we aim to release for Bristol later this year.

The workshop on the Saturday started at Filwood Community Centre in Knowle West. During the workshop, we met the team from Filwood Residents Association behind the new Community Garden at Belfast Walk. They’ve done an amazing clean up job and created a growing and wellbeing garden for the community. Simon, who’s part of the team behind the community garden, is also developing a programme for mental health support through connecting people with nature and growing. They’re hosting an Opening Day on the 30th July, which is sure to be an incredible celebration, so if you’re in the area, do go along!

The route comparison this time was more focused on how green spaces affect people’s experience of the route, with the Green Route only giving a slight increase in tranquillity rating. The ‘Fast Route’ went down quiet residential roads and then a moderately busy road over an awkward crossing. Interestingly, the moderately busy road had large front gardens and views across the city and local allotments, despite it being fairly noisy. For the ‘Green Route’, we took a gentle climb up the verdant Northern Slopes, meandering round a recently renewed green space, with wildflowers forested areas. Amazingly, this space is hardly visible from the adjacent roads, until you find narrow pathways leading to it.

After walking the ‘Fast Route’ people were feeling slightly happier, albeit very moderately, and on average they feeling just a relaxed/tense as before the walk. Following the ‘Green Route’, the majority of people were feeling much happier than before starting the second route and nearly everyone was feeling more relaxed. This was even despite the ‘Green Route’ being an uphill walk. If the walk was less steep, people may feel even more relaxed!

We talked about the potential for the Green Routes feature to help people find relaxing spaces in the local area, such as the Belfast Walk community garden, that can also strengthen community bonds and support people’s mental and physical health and connection with nature.

The Experience of the Route to Encourage More Walking

The routes are calculated using the Go Jauntly algorithm which uses the Tranquil City Index, helping to deprioritise roads with busy traffic and pollution, whilst encouraging to route via places with higher proportion of trees, greenery, water and more natural elements. Across the two workshops, participants reported that the ‘Fast Route’ was dominated by road traffic, yet the ‘Green Route’ was dominated by greenery, trees, wildlife. Interestingly, the number of people who reported community interactions along the ‘Green Route’ was higher, somewhat contrary to the expectation that more tranquil routes are empty!

The results below show that people found the ‘Green Route’ to be significantly more ‘pleasant’ than the ‘Fast Route’ and importantly, the experience of walking the ‘Green Route’ was considered to be ‘very easy’ by 63% of participants. It was also noted by some of the participants that having a green space to rest in during the walk, and seeing interesting natural elements, such as wildflowers and forestry made the journey more enjoyable.

The survey also found that people are notably more likely to travel on the ‘Green Route’, than the ‘Fast Route’ when asked the same question for both. This suggests the importance of pleasantness and our experience of the routes we travel on in making route and mobility choices. Ultimately, hinting at the potential significance of helping people find greener, more enjoyable routes on a daily basis for encouraging walking.

Green Routes for Bristol – Next Steps!

As part of the project, all participants of the workshops have been given a free yearly premium subscription to Go Jauntly to try out the app. As part of the project we are also donating £20 for every participant in the workshops to community gardens in our focus areas of Barton Hill and Knowle West. We hope to help support the creation and enhancement of tranquillity in the Bristol area, so that everyone can connect to and feel the benefits of tranquillity and walking through greener areas.

Our follow up survey will be gathering stats on how the Green Routes feature has impacted their travel habits over the 1-2 month period. We’ll be expanding these initial results after the follow-up survey, as well as collecting data on the use and routes generated around the Bristol region since the launch. This will help us to quantify how much air pollution and noise reduction the app may have helped people, as well as indicating the increase in experiencing more natural, tranquil environments.